It is time for anti-piracy groups to rejoice as the database of DDoS-Guard is reportedly on sale on a hacking forum. It is an infamous bulletproof hosting service dubbed a ‘notorious market’ that many pirate websites use.

The service is known for hosting numerous file-sharing giants, including BS., S., and Go-Unlimited file hosting services. The data up for sale allegedly includes details of those operating Russian torrent site RuTracker.

It is worth noting that DDoS-Guard is the same service that helped Parler, a right-learning social media firm, get back online after being banished by Amazon Web Services.

The listing was discovered by security vendor Group-IB on May 26.

According to Group-IB researchers, a seller on a famous cybercrime forum is offering source code and database belonging to the Russia-based DDOS-Guard hosting service.

“DDoS-Guard is a Russian online infrastructure services provider that in January 2021 helped Parler, a social media app, to return online after it had been refused web hosting services on the AWS platform…. DDoS-Guard also provides computing capacities and obstructs the identification of website owners of hundreds of shady resources that are engaged in illicit goods sale, gambling, and copyright infringements,” Group-IB researchers said in their report.

Reportedly, the seller, who goes by the online handle of “kilobyte,” has listed the source code and database of DDoS-Guard for $350,000. It is up for sale on Exploit.in. It is an old hacking forum used mainly by Russian-speaking scammers. 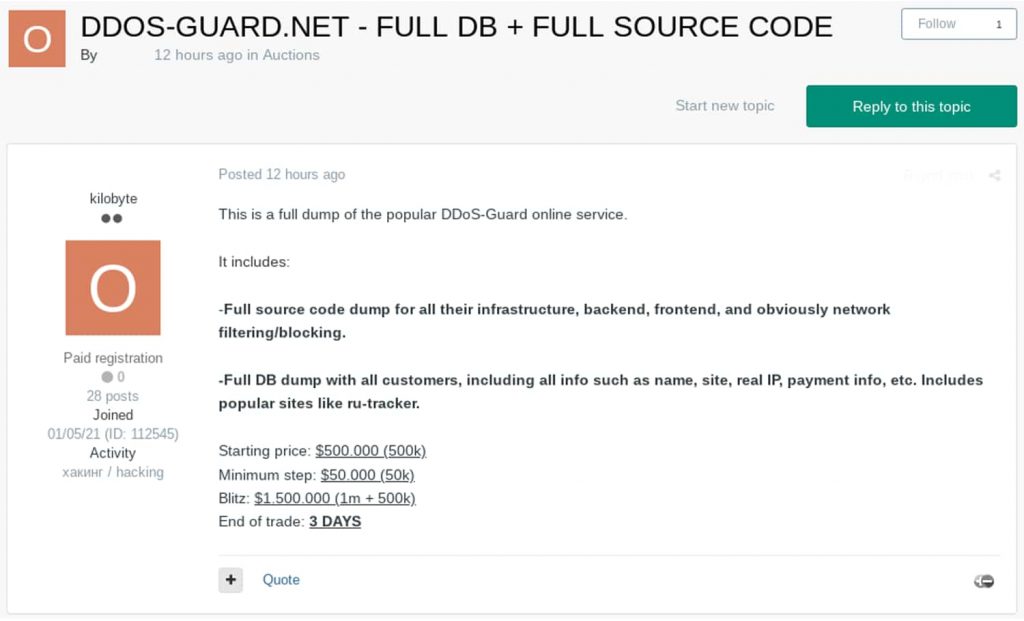 Screenshot of the listing on Exploit.in

Data Authenticity Not Proven Yet!

The legitimacy of data is still being investigated since the seller didn’t provide a data sample and had no previous sales record on the forum. In fact, the seller endured a ban for refusing to use Exploit.in’s escrow service.

However, if the data is legitimate, it will be a welcome change since a company known for aiding cybercriminals will get a taste of its own medicine by becoming a victim of a data breach.

According to Group-IB’s threat intelligence analyst, Oleg Dyorov, if the data is legit, cybercriminals can use it in numerous ways, from carrying out mass spanning and ransomware attacks to launching targeted phishing attacks.