Accenture maintains that no client data was impacted but the cybersecurity fraternity believes the company is downplaying the ransomware attack.

The infamous LockBit ransomware gang launched a ransomware attack against global IT giant Accenture. However, Accenture claims that the attack didn’t cause any damage to the client’s data or its systems.

But, Hackread.com can confirm that the professional services provider’s name was listed on LockBit’s leak site, next to a time set to go off on Wednesday. The gang also posted a note hinting that they possess some databases belonging to Accenture.

“These people are beyond privacy and security. I really hope that their services are better than what I saw as an insider. If you’re interested in buying some databases, reach us.”

A full preview of the note posted by the LockBit ransomware gang: 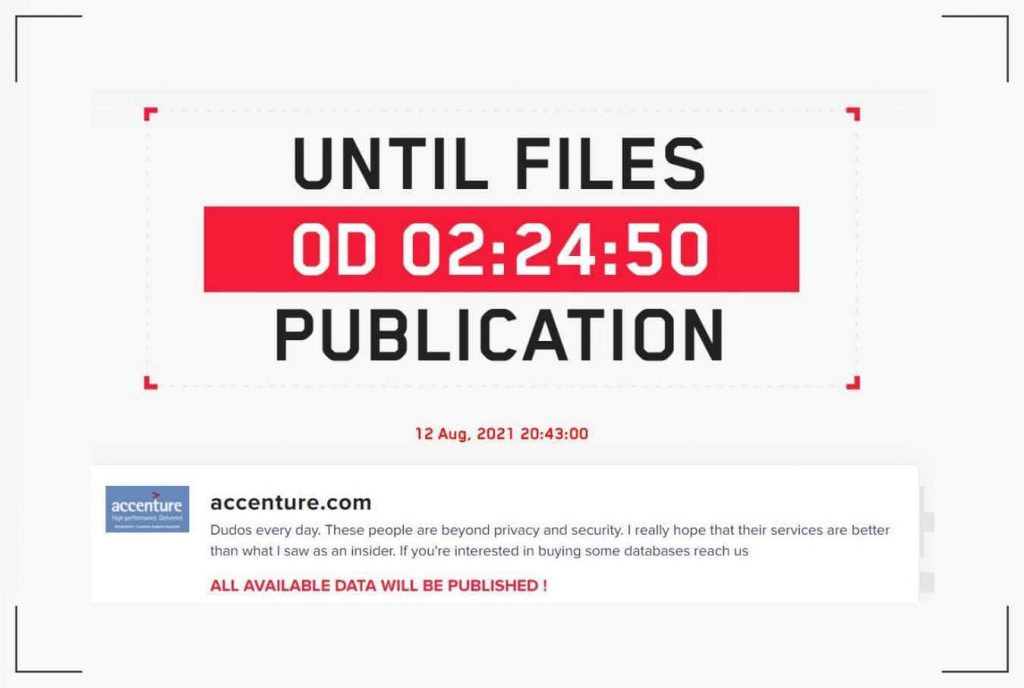 The Ireland-based Accenture brought in over $40 billion in revenue in 2020 and boasted over 550,000 employees across multiple countries. It offers a wide range of services to around 91 Fortune Global 100 firms and many other companies.

Accenture excels at a few things, including IT services, technology implementation, cloud services, and consulting. It’s definitely going to pose an immense reputational risk for such a high-profile and reputed firm to suffer a ransomware attack.

Hence, the company released an official statement discrediting the rumors that the attack had a massive impact on its systems.

“Through our security controls and protocols, we identified irregular activity in one of our environments. We immediately contained the matter and isolated the affected servers. We fully restored our affected systems from backup. There was no impact on Accenture’s operations, or on our clients’ systems.”

LockBit offers a ransomware-as-a-service (RaaS) model, facilitating fellow cybercriminals or affiliates to launch ransomware attacks through its platform. The payments are usually divided between the malware developers and the entity hiring them for the attack.

The Lockbit ransomware gang emerged on the threat spectrum back in September 2019 and made waves in June 2021 after launching LockBit 2.0 and recruited new partners. The gang claims to offers the “fastest data exfiltration on the market through StealBit,” noted Emsisoft in the gang’s profile.

StealBit is a data stealer that can download 100 GB of data from an infected system within 20 minutes. Some of the gang’s previous victims include Merseyrail and the Press Trust of India.

Is Accenture Downplaying the Attack?

It is alleged that the billion-dollar tech services provider Accenture is downplaying the ransomware attack by the Lockbit ransomware gang on Tuesday night. Many are questioning the amount of data the gang must’ve taken away, but the company didn’t respond to any queries. It also didn’t reveal whether it was an insider attack or not and when did it occur.

Cybercrime intelligence firm Hudson Rock revealed that nearly 2,500 computers of Accenture partners and employees were compromised. Another research firm Cyble tweeted that the attackers stole 6TB of data and have demanded a ransom of $50 million.

Nevertheless, reports also suggest that Accenture has notified one CTI vendor about the attack and will notify all impacted parties soon.